Oppression pushed the group of believers to meet in a field. The preacher dismissed previous warnings as he stepped up on a table in front of a small crowd. He knew imprisonment was likely. As soon as he finished his sermon, two men appeared from the woods and seized the preacher.

“What are you doing here?”

“I am preaching the gospel of Christ.”

“Who gave you this authority?”

“The Author of the gospel.”

The authorities extended a few abusive epithets and then hauled the preacher to jail. He would not leave his cell for another five months. During his time in prison, a group attempted to blow him up. At the moment of the explosion, he was singing a hymn. The terror didn’t stop him from finishing the hymn. The explosion left him shaken but uninjured.

While in prison, the preacher was poisoned but survived. Someone attempted to suffocate him. He kept preaching in the jail. The authorities placed the worst of society in the cell with him. He won them to Christ. After his release, two people poisoned his family at a meal. The preacher barely survived, and one of his eight children died as a result of the poison.

Where did this happen? The place was Virginia. The year was 1770. The preacher was James Ireland. Prior to the Revolutionary War, religious liberty was not a widely accepted concept. Each state had a state church. In Virginia, it was the Anglican Church. If you wanted to preach in Virginia, you had to get permission and a license from the bishop. Dozens of dissenters like Ireland were fined, persecuted, jailed, or killed.

A lack of religious liberty is not new threat.

A return to pre-Revolutionary War persecution is unlikely. However, the erosion of religious liberty should get the attention of every church leader.

Religious liberty is a key part of America’s legacy. It was not always this way. The history of our early colonies are rife with examples of religious persecution. The Puritans of Massachusetts Bay Colony maltreated the Quakers. Anti-Catholic sentiment was popular in New England. Freedom of religion was not formally adopted until the Maryland Toleration Act in 1649. This act laid the foundation for what ultimately became the First Amendment in our national constitution. The constitutional right to religious liberty was adopted in 1791: “Congress shall make no law respecting an establishment of religion, or prohibiting the free exercise thereof . . .” Since the late 1700s, our nation has cherished the ability to worship as we choose.

The American public believes firmly in religious freedom. The vast majority of Americans believe people should be free to worship with others, choose beliefs, share a religious faith, and even run a business in accordance with religious beliefs. 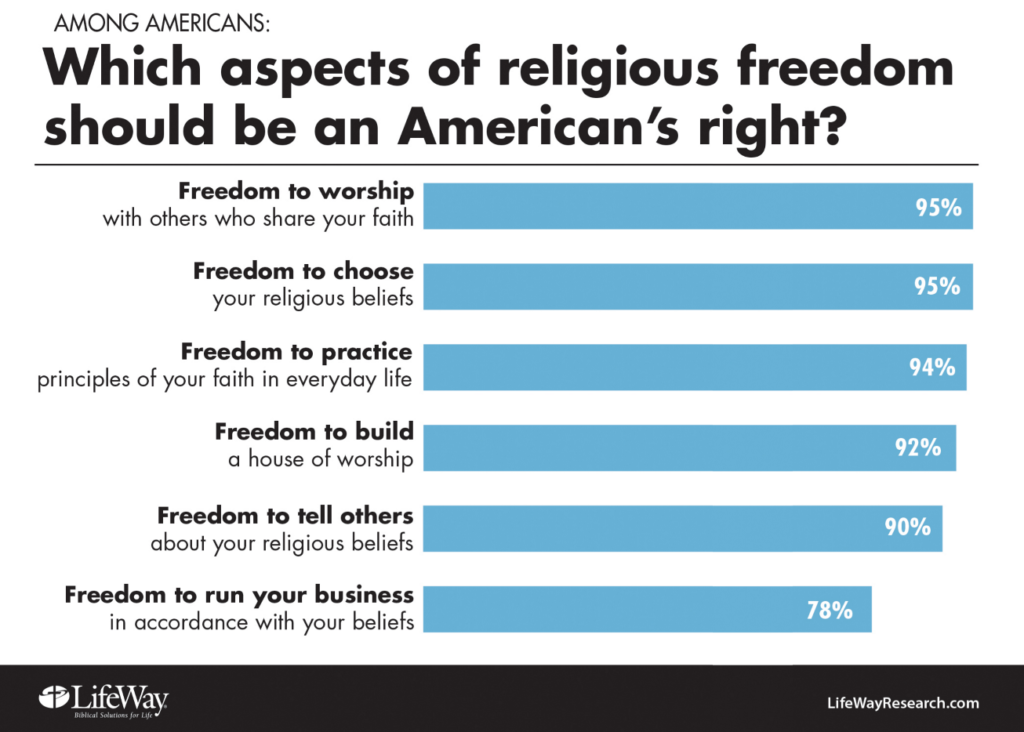 Additionally, a growing number of Americans believe religious liberty is declining in the United States.

Doing nothing is not an option. Maintaining the status quo is an impossibility because the culture has moved it without the church’s input. I’ll offer four ways church leaders can begin to help their congregations move forward in this new era of deteriorating religious liberty.

Unfortunately, the erosion of religious liberty is increasing the likelihood of threats to your church. Churches sticking with biblical truth will face these threats from the government, media, business, and even other churches. Jesus warned the church that we would face these threats. While darkness threatens, it can’t win. The decline of religious liberty is simply an opportunity for a gospel advance. Be clear. Be truthful. Stay engaged. And show kindness. Above all, have an attitude like James Ireland, who, when asked about why he kept preaching, said it was worth it to “suffer all for Him.”